Listen to our radio show, "The Improv Hour" on Cornell Radio! Airing every Saturday at 7pm! 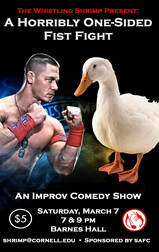 A Horribly One-Sided Fist Fight
John Cena vs. a duck? This doesn't seem like a fair fight...

Come watch a duck get pounded by a full-grown man at the first Whistling Shrimp show of the semester!

​Shows are Saturday March 7th at 7 and 9 in Barnes Hall. Tickets are $5 and can be purchased by messaging our Facebook page or any one the shrimp members, or can be purchased at the door. Can't wait to see y'all there! 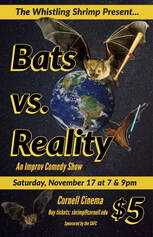 Bats vs. Reality
"Life has no meaning. Death is inevitable and we will all end up alone and forgotten. Why work hard to catch bugs when I will eventually be consumed by the unstoppable black hole of time"
-Some bat somewhere probably

Come help our bat friends cope with the intangible concept of reality and the second Whistling Shrimp show of the semester! Shows are Saturday Nov. 17th at 7 and 9 in Cornell Cinema. Tickets are $5 and can be purchased by messaging our Facebook page or any one the shrimp members, or can be purchased at the door. Can't wait to see y'all there!

(sorry for any existential crises this description may have caused)

Mini-Golf Wet Dream
​You see it in your dreams. Every time you close your eyes you feel that soft breeze once more on your face. Putt-Putt Family Mini-Golf Park. The name sends a shiver down your spine. You wake up in a cold sweat and realize you're alone, with only a brochure on your night stand. Another disappointment, but wait...

You check your Facebook and realize you've been invited to an improv comedy show!!!

Starring Ashley TisKale, Celery Duff, the sprout twins, and Hannah Banana, this new smoothie is sure to blend up a new batch of awesome! Remember that scene in Eddie's Million Dollar Cook Off where Eddie tries to blend up a smoothie but the top flies off and it goes everywhere? Well if you liked that scene, you'll love this new orginial smoothie!

Johnny "Buckets" and the Search for More Buckets - An Improv Comedy Show
​You heard it here first folks; little Johnny "Buckets" is on the search for more buckets. Don't be deceived by that cute little face, he's prepared to do anything to find more buckets. Rumor has it that he once killed a man just for a shovel and pail! Who knows what he'll do when faced with the chance to find a metal or wooden one! All I know is I wouldn't want to be standing in between Johnny and his buckets when it comes down to it.

Johnny's been all over on his quest for more buckets. From riding on the backs of dinosaurs, to fighting in the revolutionary war, to scaling the Great Wall of China, and even going to the moon twice, he's done it all. And yet Johnny just can't seem to find any more buckets! Fear not though folks, because the next stop on Johnny's journey is Barnes Hall right here at Cornell University. Will Johnny find more buckets? Will we ever learn just why Johnny is so desperate for more? Just how many buckets does Johnny have? Where have all the buckets gone?!?!?!?

​To find out what happens next come see The Whistling Shrimp Present: Johnny "Buckets" And The Search For More Buckets! Shows are on November 5th at 7pm and 9pm in Barnes Hall.

​Someone Will Legit Eat Sand In This - An Improv Comedy Show
​Ever wondered what it would look like as a college student shoved a handful of sand into their mouth? Ever wonder about the sounds they would make as they struggled to eat that grainy goodness? Well wonder no more, because you'll get to enjoy all that and more at our next improv show: The Whistling Shrimp Present: Someone Will Legit Eat Sand In This!

Isn't improv supposed to be on the spot and not at all planned out though? Why yes, yes it is! But that's not stopping us from promising you that one or more members of The Whistling Shrimp will legit eat sand at our next show.

Will it be kooky Leia, who after spending so much time around her pet snake may actually be turning into one herself and is desperate for sand? Or will it be sweet sweet Brendan, so immersed in Pokemon Go that he mistakes sand for sugar? Or perhaps goofy Josh in the hopes of quenching his thirst for his home of California? And let's not forget about our newest member Alex; does he have a secret taste for sand that we've yet to discover?

To find out come see the shows! There will be a show at 8pm on Friday, September 30th, and at 7pm and 9pm on Saturday, October 1st. All of them will be in Risley Theatre!
​

The Whistling Shrimp Present:
Cat Scratch Fever!
OH HECK YES. I told you. I told you all. "What if our next show was titled Cat Scratch Fever?" and here it is. You laughed it off, or didn't pay attention, but my goodness were you wrong. Get ready. This one's live.

Spring Break is over, but the fun never stops because the Whistling Shrimp are back for their last show this semester! Come spend a purrfect night at any one of our four shows! That's right, the same number of shows as paws! FOUR!

It's also the last time our seniors, Sam Nadell and Steve Britenstein, will be performing, since they're graduating and moving to a big farm up north where they can play with all the other kitties forever. Promise.

All of our shows will be in Risley Theatre and cost $5. There will be shows at 7PM and 9PM on both Friday, April 8th, and Saturday, April 9th. Don't miss out, come on out to what will be the opposite of a cat-astrophe! It's going to be more fun than a ball of yarn or peeing everywhere to ward off the neighbor's tabby!

Invite your friends, wear your finest calico coat, and get ready to get down. Meeeeeow!

That darned moose is at it again! What are we supposed to do, stand by and let it do whatever it feels? No! It's time we all took a stand. Join The Whistling Shrimp on Saturday, November 21st for a very serious, rational look at the moose and all the wrong it does.

We will have shows at 7 and 9pm, and tickets are only $5! What a steal, especially because every dollar raised will go directly towards halting that moose in his mischevious, antic-ridden tracks. Tickets can be purchased from any Shrimp member, or from one of the fine links below, or right on this very page!

What are they up to? Where did they hide the bodies? Why are they typically in the same shape regardless of make or model? Come to The Whistling Shrimp's first show of the year to get the answers to none of these questions (probably. It is improv, and anything is possible, but ultimately it's unlikely that our show is chair-themed. Sorry to all you sitting enthusiasts)!

Come on out Friday October 2nd or Saturday October 3rd at 8pm in Barnes Hall for some laughs, some intrigue, the newest members of the Whistling Shrimp, and much much more! 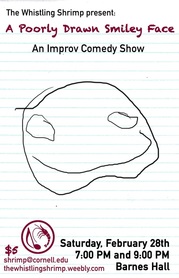 
Every once in a while you come across a smiley face so poorly drawn that it makes you say, "Wow, whoever made that clearly spends lots of time doing improv, and not enough time working on their smiley faces."

As it turns out, the Shrimp are whoever made that poorly drawn smiley face. Come on out to our shows on Saturday 2/28 at 7PM or at 9PM in Barnes Hall auditorium and see just how much we prioritize our improv over our artistic inclinations!

Finals are upon us. You think that's an excuse to not have fun on a Saturday night? Well if you think that then you're a crazy person. Don't be a crazy person and come watch a PROFESSIONAL improv comedy group from NYC perform at Cornell! Upright Citizens Brigade, which has previously featured comedians such as Amy Poehler, Ed Helms, and Aziz Ansari, is sending their touring company to Cornell to make you all laugh. And best of all, the show will also feature all four of Cornell's comedy groups! So come and watch performances by The Whistling Shrimp, The Skits-O-Phrenics, Humor Us! Sketch Comedy, PBNQ Improv, and the fabulous UCB Touring Company!
It all goes down Saturday at 8PM in Call Auditorium!
And tickets are only $5! To get one talk to any member of one of the four comedy groups or email shrimp@cornell.edu or right here on our shrimp website!

Don’t you wish you could sprinkle some magic dust and go back to the good ol’ days of being thirteen? We certainly don’t! The Whistling Shrimp are 'thirty, flirty, and thriving' and ready to celebrate!
The Whistling Shrimp, Cornell's oldest improv comedy troupe, will be having it's 30th anniversary show SATURDAY 11/15 at 7PM and 9PM in Barnes Hall. Come to the 7PM show to see the current shrimp make some comedy goodness, or come to the 9PM show to see us take the stage with our awesome alumni!

The Whistling Shrimp Present: A Much Too Early Christmas-Themed Show - An Improv Comedy Show

Santa Claus is comin' to town and everyone's getting improv comedy for Christmas this year! We know it's just what you wanted ;)
The Whistling Shrimp, Cornell's oldest improv comedy troupe, will be having it's first big show of the semester on SATURDAY 10/4 at 7 and 9 at the Schwartz Dance Studio! Two shows in one night! Wowzas!

BUT WAIT! There's more! This will be the last show for our three seniors, Jon, Keith, and Chris. We know we'll miss our graduating shrimp, so make sure to come out and help us give them the most kick-butt last show possible!

﻿The Whistling Shrimp present: (Blue-footed) BOOBIES: An Improv Comedy Show
﻿
Everyone loves boobies! Get your mind out of the gutter- we're talking about the adorable, blue-footed birds! Did you know they build nests out of their own poop!?

The Whistling Shrimp, Cornell's oldest improv comedy troupe, will be having it's first big show of the semester on SATURDAY 3/1 at 7 and 9 at the Schwartz Dance Studio! Two shows in one night! Hot diggity!

Remember that old nursery rhyme lady we used to hear about in preschool? Remember that book series we used to pretend not to be scared of? This show will probably have nothing to do with either of those things!
On SATURDAY 10/26 AT 7&9 PM IN THE WILLARD STRAIGHT HALL THEATER!!
Powered by